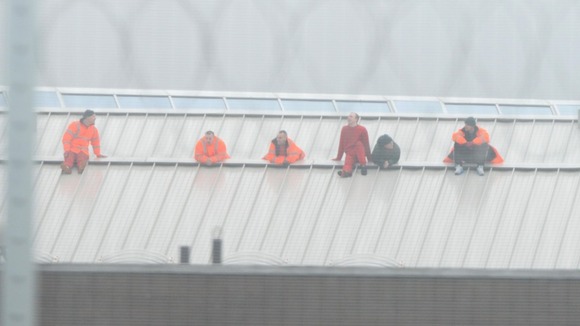 SOLIDARITY TO THE PRISON RESISTANCE!!!

Prisoners at a heavily-criticised prison near Wolverhampton have staged a rooftop protest this afternoon – for the second time in a matter of weeks.

Six men scaled the walls of HMP Oakwood and set up camp on the roof this afternoon.

The men, most of whom were wearing orange hi-vis jackets, were heard shouting down to people on the ground while security firm G4S, which runs the prison, patrolled the area.

The protest comes just weeks after three men climbed to the top of the prison in a similar protest last month.

A report released earlier this year slammed the prison for its inexperienced staff and high levels of violence and self-harm, as well as failures including not giving prisoners toilet roll.

Bosses at security firm G4S, which runs HMP Oakwood in South Staffordshire, have put contingency plans in force as a rooftop protest continues at the prison.

A spokesman confirmed six prisoners were involved in the incident.

We can confirm that an incident involving six prisoners is taking place at HMP Oakwood.

The Ministry of Justice has been alerted and our normal contingency plans have been enacted.

A rooftop protest by inmates at HMP Oakwood prison in South Staffordshire has come to an end.

At around 11am this morning, six inmates scaled the walls of the building near Wolverhampton.

It is understood no staff or prisoners were injured during the incident and that no damage was done.