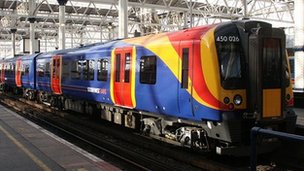 A train was delayed for about three hours with passengers stuck on board after vandals placed traffic cones on tracks in south-west London.

Fifteen cones were placed on the line, used by the London Waterloo to Reading service, near Mortlake Station at about 23:10 BST, South West Trains said.

The train was damaged and the service was halted at Mortlake Station, where passengers were able to get off.

This entry was posted in General and tagged London, rail sabotage. Bookmark the permalink.